Four in a row for Communicate

Four in a row for Communicate Technology as they are listed as one of FT 1000 Europe’s fastest-growing companies again. Published on: 25th March 2020 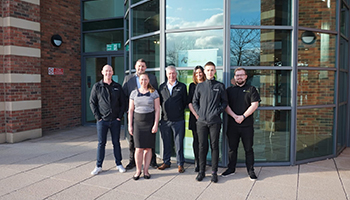 A leading IT and telecoms company based in the Tees Valley has been named as one of the fastest growing companies in Europe for the fourth year running.

Communicate Technology PLC has been identified as an outstanding company in Europe by the Financial Times in 2020. They’re the only technology company in the UK and the only organisation in the North East to appear on the list four years running.

The FT 1000 report says: “Competition is even tougher at the top this year, with companies requiring a minimum growth rate of 38.4 per cent to make the list, compared with 37.7 per cent last year.”

Increasing turnover by 186 per cent since 2015, Communicate show no signs of slowing down.

CEO Tony Snaith said: “To be recognised once again and to remain on the list for four consecutive years shows that we have consistently evolved to remain ahead of the curve. We have no intentions to slow down and have some exciting plans in the pipeline including a presence in the capital.”

Konrad Rutkowski, finance director said: “Our commitment to growth has seen us expand our offer. The expansion of services has seen us drive sales within our existing client base as well as adding to our client list and helped us provide an all-encompassing service.”

Working with the likes of Adidas, Yext, Octopus Energy, Dell, MIDOS Property Group and Surrey Health they have built an enviable reputation.

Operating across the UK from their headquarters at Wynyard Business Park as well as Leeds, Bedfordshire and Kent, Communicate has a national portfolio of clients providing telecoms, internet, cloud services, hardware and software, cyber security and technical support to businesses and commercial property management companies across the UK and Europe.